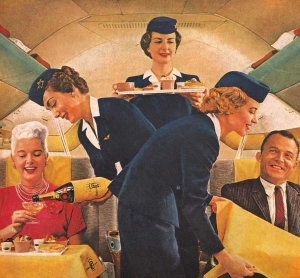 I have never flown first class on an airplane.  Heck, I haven’t even flown on business class.  But I am lucky enough to say that I have traveled a fair amount.  And every time that I make my way to the back of the plane, I wonder about who actually sits in first class – and I am reminded of a funny story that a friend told me.

Tom’s sister used to be a flight attendant.  As such, her entire family got to fly for free (this was in the 80’s … I have no idea how it works now).  Their only expense was that they had to pay the taxes (or something) on the seat.  Because it was so cheap, the family could afford to fly first class.

One day, Tom’s dad was sitting on the aisle in first class.  A guy walked by and tapped him on the shoulder and said “Hey buddy.  I was just wondering.  How much does it cost to fly in first class?”  Since Tom’s dad had only paid the taxes, he truthfully replied “I really don’t know.”  And before Tom’s dad could explain, the passenger laughed and walked on and said “Man, that’s rich!”

This entry was posted in Uncategorized and tagged first class. Bookmark the permalink.